How many hours is "Part Time"?

There's yet no official definition of part-time, so how many hours could be considered part-time? This varies from country to country - let's look at the evidence 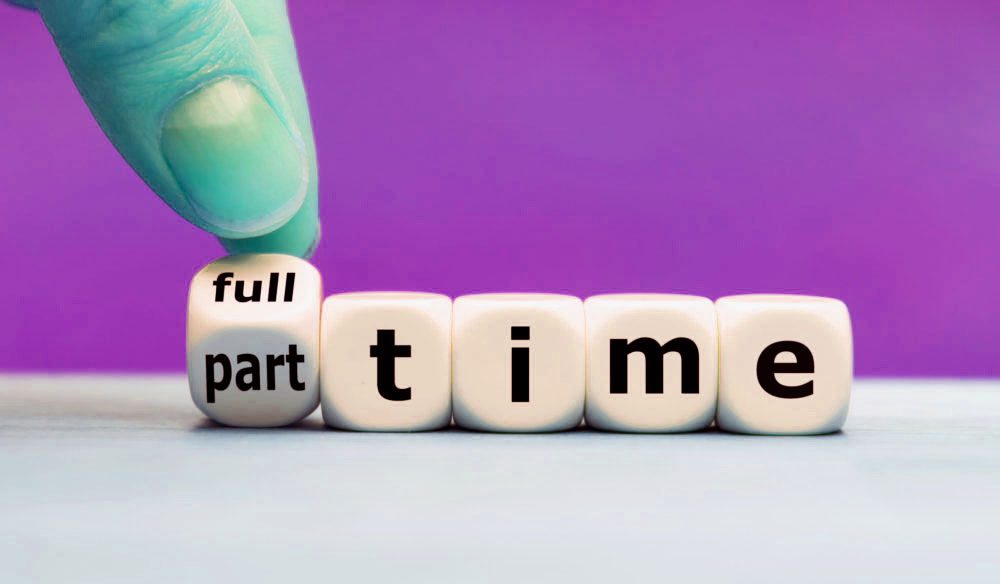 The definition of part-time, for a long time, has been jobs that take "substantially less" than the M-F, 9-5 requirement. Part-time jobs can range from a few hours helping out at a family business, all the way up to covering a couple of shifts a week, but there is a nebulous middle ground between part-time and full-time that needs to be considered as an employer. So, how many hours is part time? How many hours is full time?

According to Statista Research Department, approximately 25.13 million people in the US are working on a part-time basis; almost 20% fo the US workforce are employed on part-time contracts. This is a huge number which has slightly increased over the last 15 years as more people seek flexibility in their work.

There are many benefits to working party time but the most important is freedom and flexibility in your life. Working part time can help you escape from the stress of a workplace with long hours and from the constant pressure, helping maintain both your mental and physical health as this is often sacrificed by people working in full-time jobs. Furthermore, for people who have children, working part time may be the only option.

The laws defining part-time labour vary from country to country, however. For example, the definition (e.g. hours per week), benefits offered (e.g. healthcare), acceptability and availability vary widely across the world. In the following we review these laws and what it means for workers.

How many hours per week is considered Part-Time?

While there’s yet no official definition of part-time, how many hours would be considered part-time?

In the US, the Bureau of Labor Statistics considers an employee as part-time if they “usually work less than 35 hours per week”.

That means anyone working between 1-34 hours is working part-time, and anyone working 35 hours or more is working full-time. These numbers are based on Current Population Survey (CPS) statistics, published by the BLS. Therefore, they are guidelines and are not official time limits for full-time or part-time working hours.

These definitions vary by country to country and state to state, however. For example, workers will be classified as part-time if they work less than:

Many of these definitions are guidelines, however, and often it is the company’s responsibility to define these limits to their employees. For example, a company may consider 30 hours of work or more as full time while another may follow the limit by BLS and consider 35 hours or more as full time.

How long are Part Time Shifts?

The number of hours someone works per day in a part time job is typically the same as a full time job e.g. 8-10 hours. This can vary from business to business and industry to industry, however:

The workforce ensures that the economy is moving forward, however, the possible exposure to exploitation may reduce their productivity and, in the end, lower a company’s overall productivity. Therefore most countries implement laws to protect the workers rights.

By law, the maximum hours an employee may work per week, is as follows:

In most of these places however, you are legally allowed to work for longer hours - but if you do, you must be paid at a higher rate. For example, in Texas, all work which exceeds 40 hours per week must be paid at 1.5 x the employees regular hourly rate.

Many factors influence the culture of overwork in the U.S., but some factors have more influence than others. The United States government made the choice to tie offerings of health insurance to full-time employment under the Affordable Care Act for companies with 50 or more full-time employees. For many years before that, it was already expected that qualifying for benefits happened at a full-time level, so such a ruling was in many ways a long time coming and actually was intended to protect workers.

Because of this legislation, medium and large companies pay very careful attention to the bottom-level cut-off for full-time employment: part-time employees are seriously reprimanded if they work more than 29 hours a week or 130 hours a month, because it could result in a fine for not providing health insurance to these accidentally-full-time employees.

In practice, some companies attempt to get around the law by hiring just as many full-time equivalents (FTEs) as other large companies, but refusing to let most of them work more than 29 hours a week. Many of these same companies also have frustrating labour practices, such as at-will shifts that can be called off all of a sudden, and very low pay.

The changing of schedules each week, in particular, makes calling this 29-hours-a-week job 'part-time' seem incorrect; if the person must wait until one or two weeks beforehand to know when they'll be expected at work for 29 hours, there is very little remaining time for them to participate in the other 'part' of their lives, as mentioned above.

There are certainly companies that make 20-29 hours a week a truly free experience by offering competitive pay, flexible work hours, and even benefits, but the creation of a legal definition of full-time as 30 or more hours does offer a loophole to those who are willing to take it.

In the reality of exploitative labour, 28 or 29 hours a week isn't part-time at all; it's merely "not technically full time," a way to deprive people who essentially work full time of the benefits of that commitment.

Putting a minimum on full-time work results, as we saw earlier, in the possibility for exploitation. Canada's example offers another possibility. Canada's legislation focuses on limiting overwork by placing an upper limit on 'standard' full-time workers of 40 hours per week or 8 hours a day, and a general upper limit of 48 hours a week, with 8 of those hours being considered overtime and qualified for higher pay. Exceptions exist, but the protections offered by this rule are substantial.

Protections and limitations on overwork are key; many workers are frustrated by the common trends in their offices where too many hours are expected for the same rate of pay, above and beyond normal full-time hours. Normalizing overwork isn't actually good for employers, who experience higher turnover and burnout rates as a result, but the ever-upward creep of the definitions of part-time and full-time add pressure.

The European Union has made an even more broad claim, which helps employers focus on what they need rather than on cost savings: part-time workers are entitled to the same "pay, leave, notice periods, and other rights and benefits" that full-time workers are. The loophole, for them, is closed, which may not be the right way for the United States to handle it, but is certainly a case study to examine.

Part-time work is the kind of work that leaves you time for other pursuits. It could be 10, 15, or even 20 hours a week, but it shouldn't be 29 hours with a schedule that changes every week. Calling this 'part-time' at the same time that working a single 10-hour shift and having six free days to do with what you will are simply lumping too many circumstances together into one umbrella term.

Freedom of some kind should come alongside the challenges of part-time work (chief among them is not bringing in a full-time level of pay, but there are others).

The grey area between part-time and full-time should be put to the test by asking whether someone could reasonably get a second part-time job and thrive in both of them. If that isn't possible, it is likely that the first job was really much closer to 'full-time' in its impact on the worker's life.

With the many technological resources and organizational tools available, United States workers are more effective than they've ever been; 30 hours of work in 2020 can accomplish what would have taken dozens, sometimes hundreds, of hours in the past.

29.99 hours does not make a part-time job, especially without protections like benefits or consistent schedules. As you interrogate whether to call a job part-time or full-time, consider not only the hours the person must commit to the work itself, but also the level of commitment by the employee to make this part-time job work: can they maintain their work-life balance at a part-time level, or are they really giving way more to work?

“Can I request Part-Time hours”?

If you are currently employed, the easiest way to get a part-time job may be to ask your current manager to cut down your working hours. In many countries this request must be granted by law.

For example, the Netherlands recently announced the Flexible Working Hours Act in 2016 which gives employees the right to request for reduced hours in their job. The law states that the employer is obliged to accept this request, unless there is “a significant business reason” which justifies that they cannot accommodate this.

As a result, the Netherlands has the highest percentage of “part time workers” in the world. Other countries at the top of the list, such as Switzerland, Austria & Germany, have similar laws which make it easier to request part time work.

In general, European countries tend to have more progressive laws in comparison those in North & South America, with respect to employer rights and working hours. This effect can be seen as all the countries with the least “hours worked per day” are all from Europe.

The place to find jobs with a 4 day work week