Benefits of a 4 Day Work Week · The Pros and Cons

The 4 day work week is rising in popularity, and for good reason. There are many benefits to working a four-day work week for both employee and employer

52% of employees have experience burnout during the last year, up 9% since the start of the COVID pandemic.

A shorter working week may be one solution however i.e. a 4 day work week with 4 × 8 hour days.

Interest in this topic a 4 day work week has been steadily increasing for the last 20 years, but what are the pros and cons of adopting a four day week at your company?

Academic research over the past 30 years, as well as trials in industry, has shown that a 4 day work week has many different benefits to both employee and employer, these are as follows:

A recent study by job board ZipRecruiter showed that 4 day job listings get 15% more applicants on average when compared to those with a 5 day work week.

This makes sense given that it is currently one of the most in demand benefits by employees. For example, a recent study by the Harvard Business Review found that flexible working hours and additional vacation were 2 of the top 3 most desirable work benefits.

We also conducted our own simple study which indicated that 4 day jobs get between 33% and 70% more applications than those with a 5 day work week.

Specifically, we compared the “visitor to applicant rate” on job boards i.e. the number of people who view a job and subsequently submit an application. The industry average for jobs with a traditional work week is around 10.5%, but from what we’ve observed with our customers - the visitor to application rate for 4 day week jobs is between 14-18%.

Increased productivity is one of the largest benefits to working a 4 day work week. Many different studies have shown that staff are more efficient when they work shorter hours. This is known as Parkinson’s Law i.e. “work expands so as to fill the time available for its completion”. For example:

If we look at it from a country level, the average working hours in the Netherlands have declined for the past 30 years - during this same period, productivity has increased by around 25%.

In their recent pilot, BunnyStudio reported that: “With the reformed system, team members are less likely to take sick leave since they have an extra day off to rest”.

When MRL Consulting implemented a 4 day work week they retained 95% of their staff. In comparison, the average staff retention rate in tech is around 87%.

These results have been echoed by companies who have adopted a 4 day work week. For example, Gracefruit, a soap making firm, said “Employees love having a three-day weekend, which has helped with staff turnover. We’ve not needed to replace any staff for the past six years.”

🌱 Pro #5. It’s better for the environment

Based on a recent study, by Platform London estimated that a 4 day work week could reduce a country’s carbon footprint by more than 20%. The study found that moving to a four-day workweek by 2025 would reduce emissions by 127m tonnes, the equivalent of removing all private cars.

Based on anecdotal evidence from 4 day work week companies we’ve spoken to, many have commented on how the benefit attracts more experienced developers, with many turning down higher salaries at FAANG companies so that they can work fewer hours. A study by Social Market Foundation (SMF) found a similar pattern, where they identified that “white-collar workers and people in top-paying jobs were the most willing to cut working hours”. 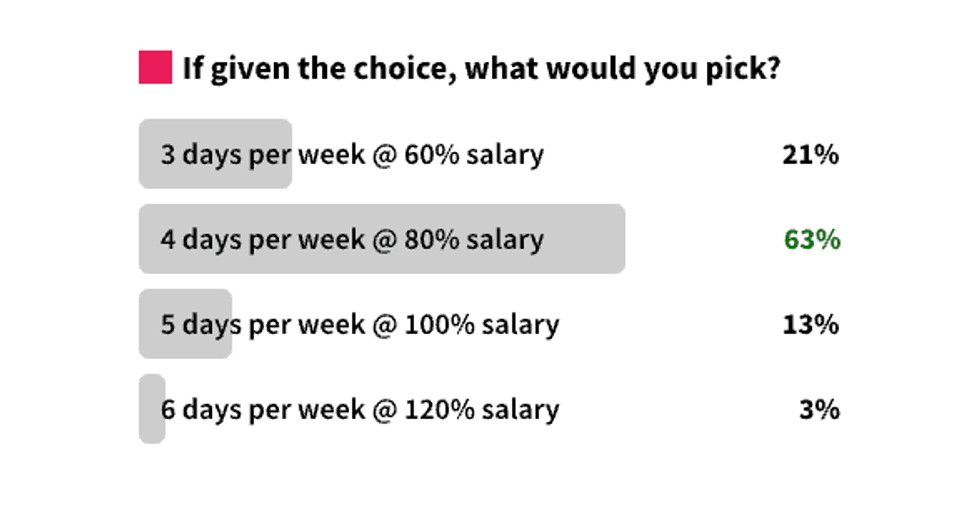 Aside from potentially offering lower salaries, there are other costs which can be reduced or eliminated. For example, if a company chooses to switch to a 4 day week they can close their office 1 day per week which will reduce:

Most companies who have trialled a 4 day work week have said that their employees were significantly happier after the switch, with many reporting lower stress. In a report by Henley Business School:

In pilots undertaken by BunnyStudio and Goosechase, both reported happier staff due to having a better work-life balance.

Clearly one of the largest benefits to an employee is an improved work life-balance. The extra day off only comprises 20% of the work week, but it lengthens an employee's weekend by 50%.

Traditional 2 day weekends often feel like 1 day to rest and 1 day to complete errands, with little time left for recreation. The extra time off a 4 day week creates, makes it easier to make full use of the weekend.

Travelling is also much easier with an extra day off. With a 4 day work week, you can now go on a long weekend break any weekend you choose.

Research by the Government Equalities Office estimated that around two million British people are not in employment due to childcare responsibilities, and 89% of these people are women. Further, 72% of carers for adults are women.

It has also been shown in a study by the Health and Safety Executive that workplace stress is around 33% higher for women in comparison to men, with similar results found in Australia and Germany.

The average cost to put a child into a child daycare centre in the USA is $340 per week for one child and $640 for 2 children. Given that the average number of children per family in the US is around 2, the average family requiring childcare assistance spends around $2,773 per month on this service.

With a 4 day work week parents have an additional free day per week, allowing them to reduce their child day care costs. Therefore, we estimated that a 4 day week could save around $6,500 per year for those families who have 2 children in childcare.

Drawbacks of a 4 day work week

As with all labour paradigm shifts (e.g. remote work), there are some drawbacks to adopting a 4 day work, these are as follows:

💸 Con #1. If productivity doesn’t increase by 25%, revenue may suffer

There is no doubt that productivity must significantly increase in order to maintain revenues and KPIs when a company switches to a 4 day work week. Specifically, productivity would need to rise by around 25% to break even.

Many companies who have switched to a 4 day work week, however, have reported increases to productivity of more than 25%. For example:

For some industries, the transition to a 4 day work week is easier than others. For example, a train driver can’t cram 5 days out work output into 4 days as people need to use public transportation every day. This is the same for many occupations, such as doctors, nurses, fire fighters etc. For any job which is a public service, it’s difficult to transition to a 4 day work week

Similarly, it wouldn’t be wise to shut down customer support on a Friday. Therefore, some teams within a company may have to be split into 2 rotating shifts to overcome this issue e.g. 1 team works Monday to Thursday whilst another works Tuesday to Friday.

If the company only has one customer support representative, other more extreme measures may have to be taken e.g. hiring an extra employee.

Given that the world operates on a 5 day work week, most of the administrative tooling works on this assumption. For example, staff contracts will need to be updated to reflect this change which will likely incur some overhead. This change may also effect other contractual policies e.g. vacation.

There number of benefits to adopting a 4 day work week out-weigh the cons in our opinion; plus, most trials have returned largely positive results. For example, one of the largest studies to date involved 2,500 staff in Iceland and was described as an “overwhelming success”.

In our opinion these benefits outweigh the cons, which in most cases are administrative teething issues (assuming the company’s productivity significant increases).