16 'Too Many Meetings' Memes every Employee can relate to

Here are 16 of our favourite memes for whenever you have 6 meetings in a day... As let's be honest, it could have been an email.

One of the last things you want to hear when you are at the office is that there will be a meeting. These announcements are often met with eye rolls from everyone.

Frequently, these meetings cover material that does not require everyone to gather together. Instead, they could have sent the information over an email. Shoutout to every Software Engineer who has ever been in a meeting about planning (future sprint) meetings.

The unnecessary meeting has become such a well-known concept that there are even memes dedicated to the subject. So let's check out the top fifteen "too many meetings" memes.

Let's kick things off with the classic X-to-the-Z-Xzibit meme: "yo dawg, we put an X in your X, so you can Y while you Y". A timeless classic. 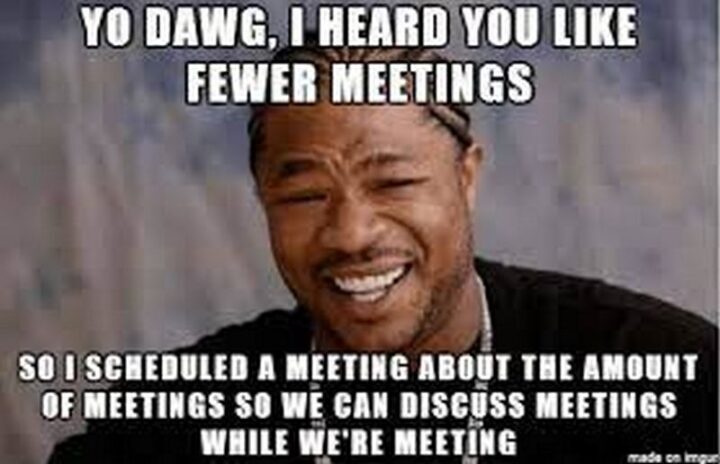 In this meme, two men appear to be sitting in an office with incredulous looks on their faces. They are questioning how many meetings can be fit into one day. This is a common irritation with the working public because the number of meetings greatly interferes with the amount of work people can accomplish. 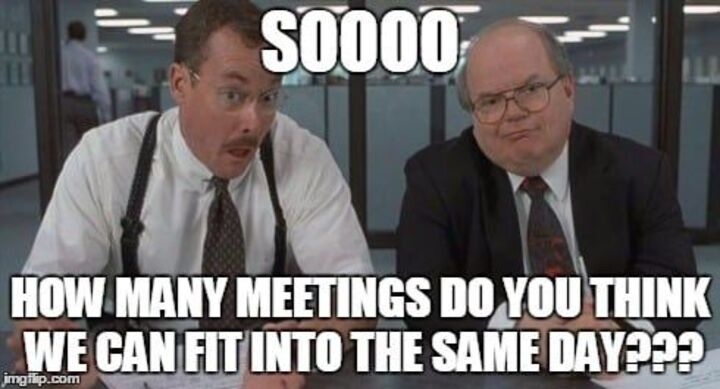 Closely related to the previous meme, this e-card makes fun of meetings being the reason that no work is ever done. It remarks that meetings will keep happening until someone figures out why work isn't getting done. The ironic part is that companies don't seem to understand that meetings are truly stopping people from being productive. 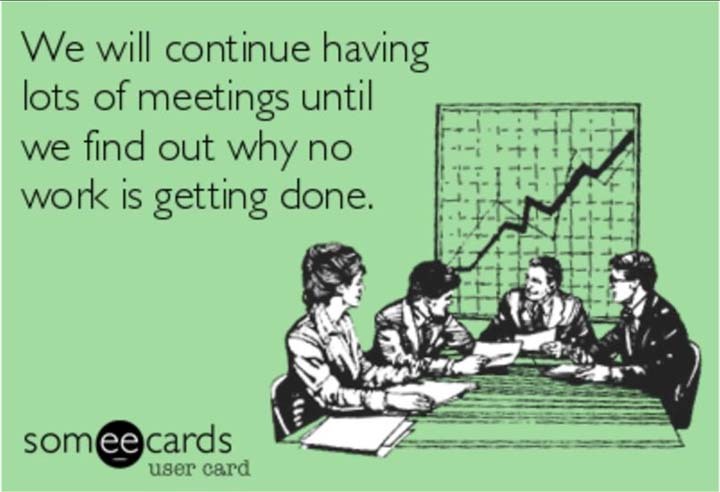 4. Buzz and Woody on Meetings 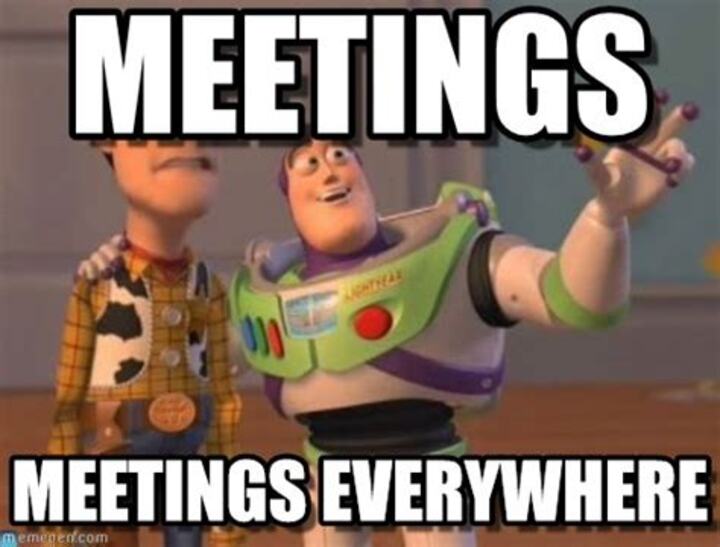 5. Buddy the Elf on Meetings

Buddy the Elf, from the movie Elf, is well-known for how much he loves Christmas. In this meme, Buddy is pictured saying how much he loves meetings. The look on his face makes it clear that he is saying this with about as much sarcasm as he can. 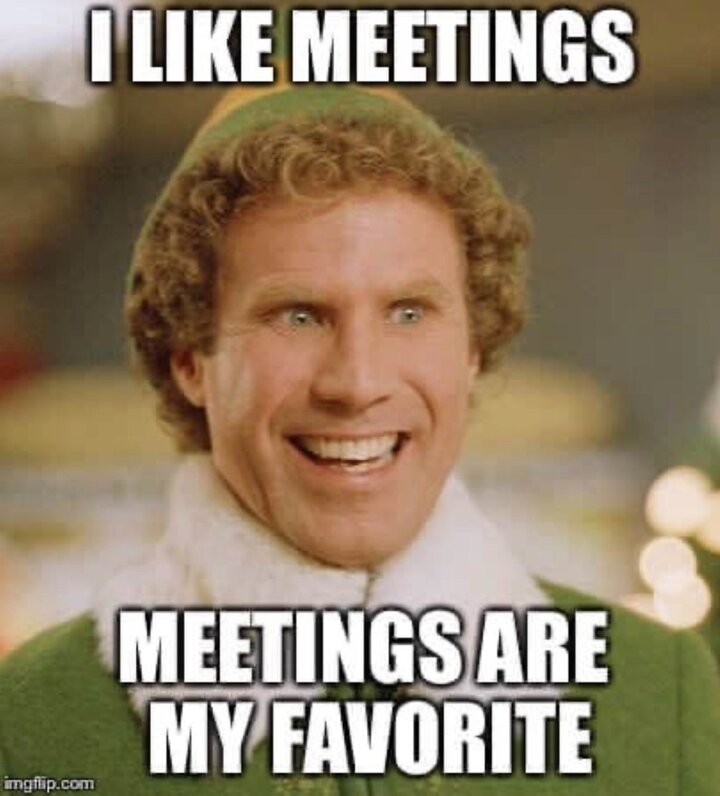 6. Should Have Been an Email

Meetings are frustrating enough as it is, and it's even worse when time is taken out of your day to be told someone that could have been sent over email. This e-card shows two people sitting in an office commiserating over a meeting they just attended that had so little information it should have just been sent in an email. 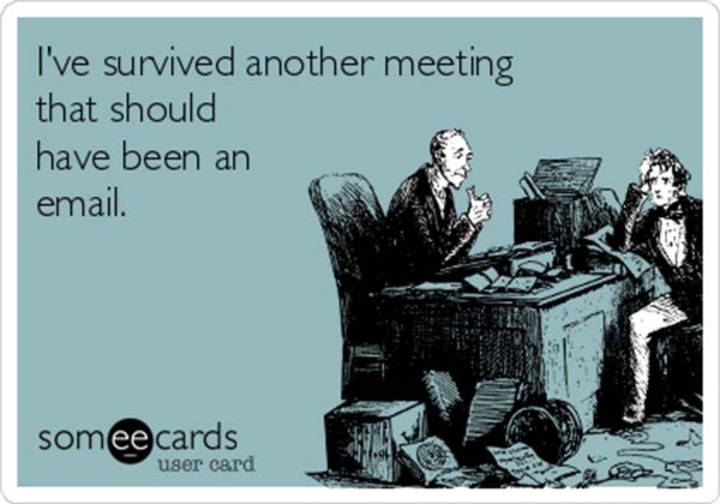 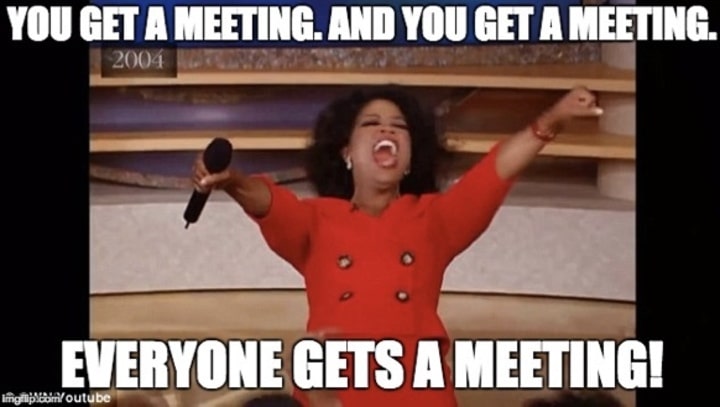 Sean Bean is perhaps most famous for his meme "One does not simply...", but here he is seen as his Lord of the Rings character Boromir, saying, "Just had a meeting on having monthly meetings." His hand is pressed to his forehead as he can't believe how ridiculous it is. 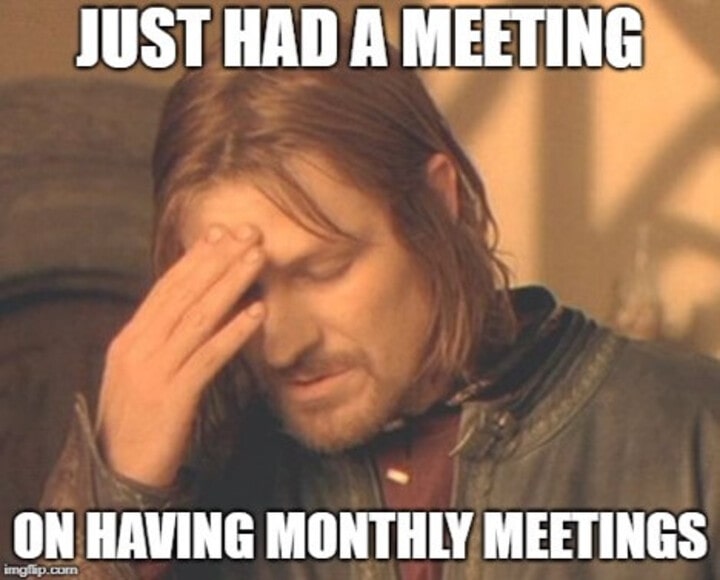 9. The Futility of Meetings

This e-card discusses just how pointless meetings are. A man and a woman are pictured discussing how meetings are often held to discuss what needs to be done, but those things often never end up happening. Perhaps due to having too many meetings. 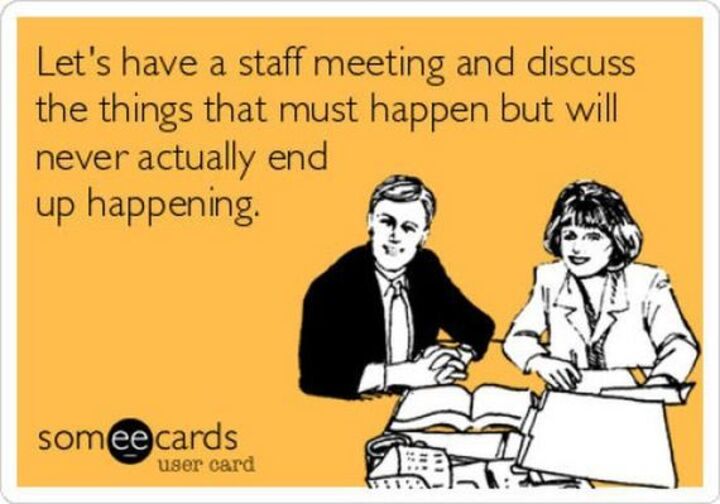 Grumpy Cat has won the world over with his frowning face and commentary on everything she hates. In this meme, Grumpy Cat is pictured with the phrase "So Many Meetings" around her. 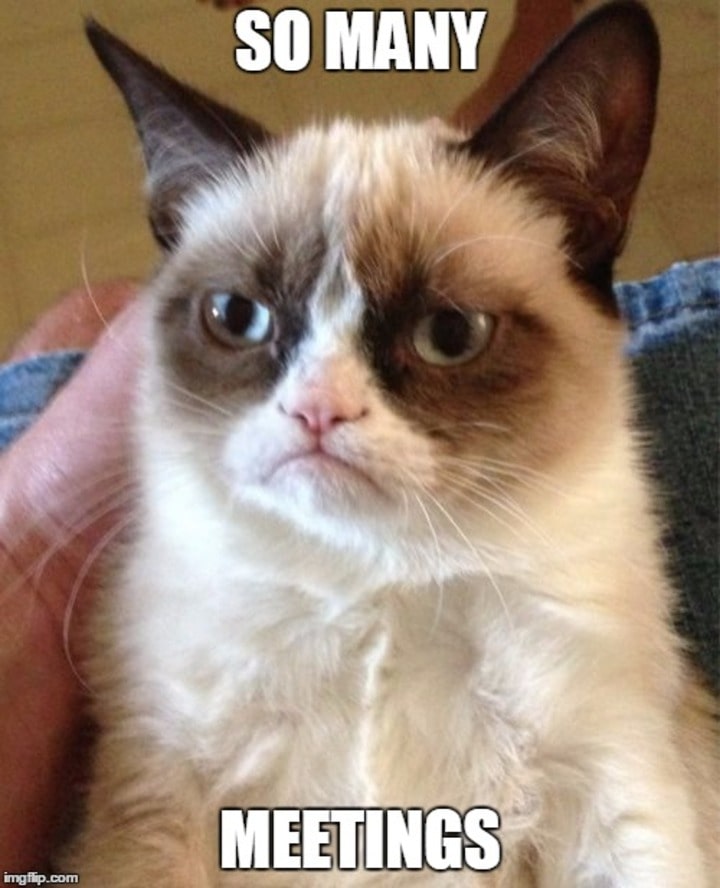 This meme pokes fun at the fact that meetings often don't actually accomplish anything. It shows a man with a chart and an audience paying rapt attention. It encourages you to call a meeting to get out of work and eat some donuts. 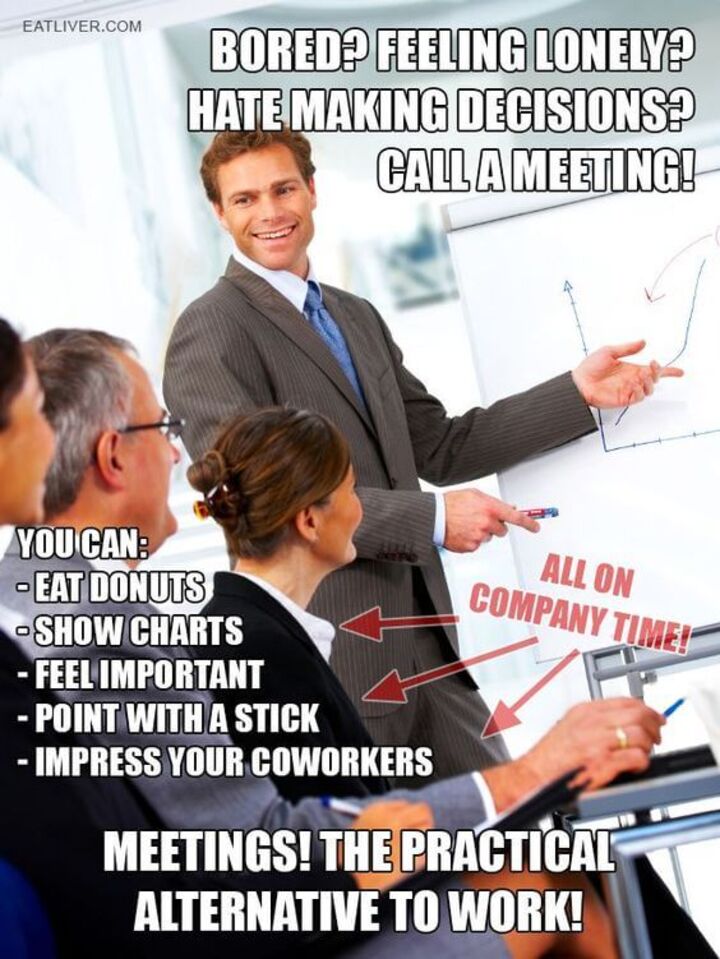 12. Just Why so many meetings?

This woman pictured in the meme with her hand held to her face, tears streaming, represents all of us when we are told about yet another meeting we have to attend. She is questioning why it's necessary to have so many meetings. 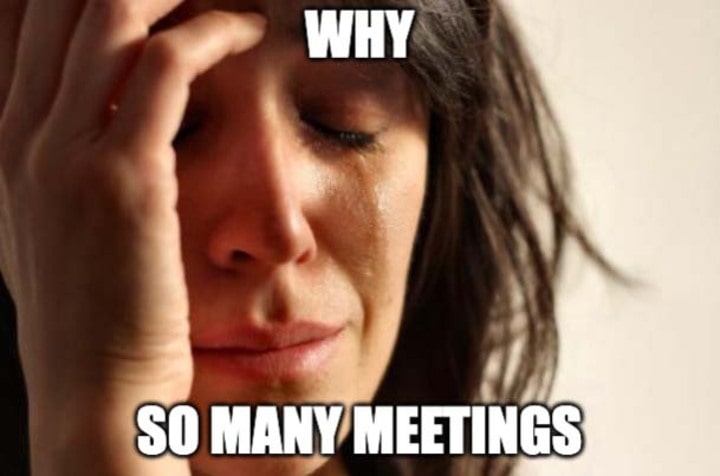 In this e-card, several people are sitting at a table with sheets of paper sitting in front of them. The text says they aren't sure they've wasted enough time. This is clearly poking fun at meetings being useless much of the time. 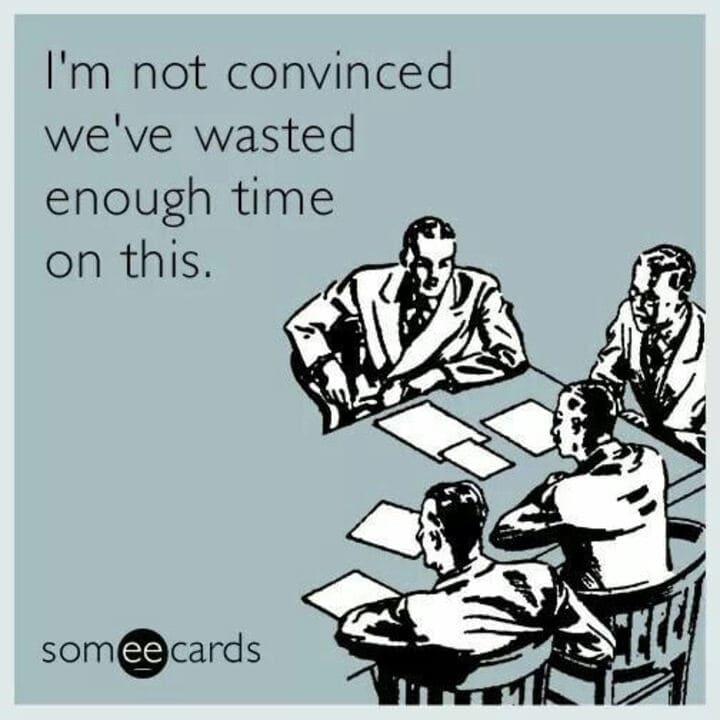 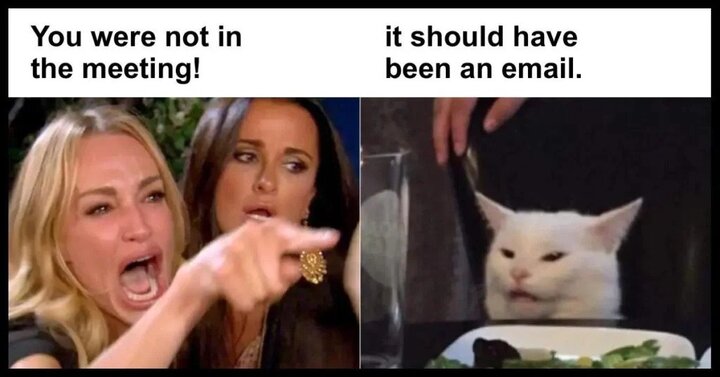 15. Ain't Nobody Got Time for That

The "Aint Nobody Got Time for That" woman comes along to share her thoughts on meetings. Plot twist, she ain't got time for that. 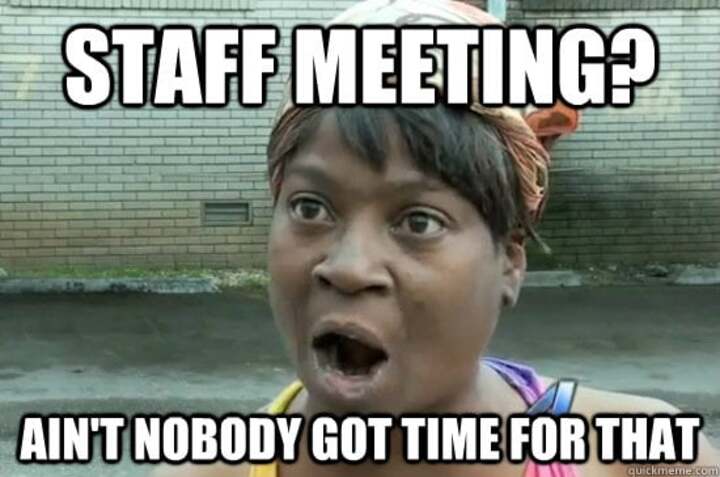 And finally, as Yoda would say: "meetings, too many I have" 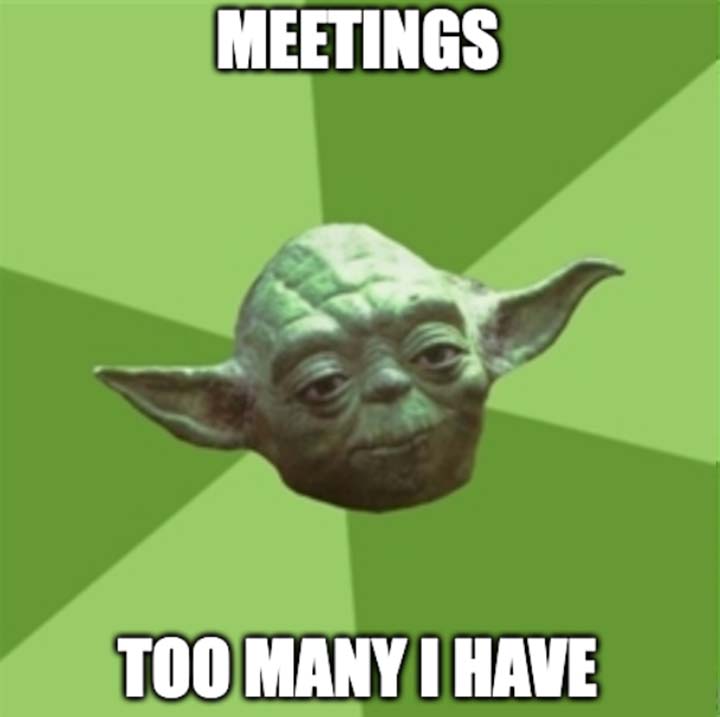